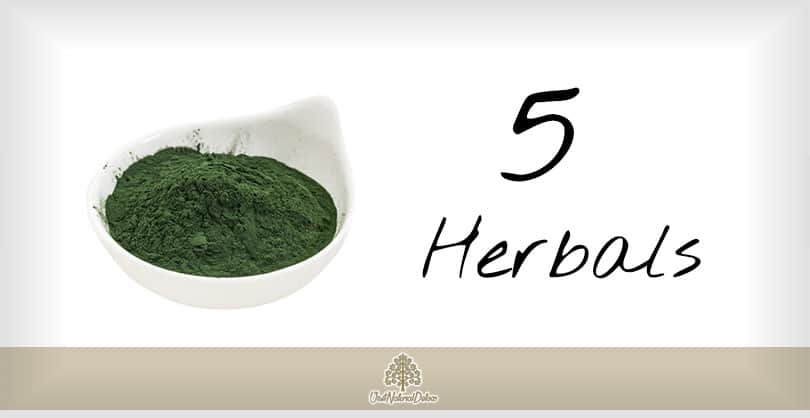 Plants and humans have developed a symbiotic relationship during their millennia on the planet together. Over time, our ancestors studied, cultivated and experimented with local herbs, eventually learning their therapeutic benefits. Scientists continue to examine plants, attempting to isolate components to aid in the fight against diseases. In an era where obesity levels are epidemic, consumers would benefit from incorporating medicinal herbs into their diets and employing moderation in their lifestyles. They can also help boost healing and encourage health for everyone.

Let’s take a look at these five powerful tools of healing!

As one of the most celebrated herbs in modern society, Turmeric has also been in the herbalist’s cabinet for centuries. Turmeric or Curcuma longa contains an anti-inflammatory agent that fights oxidative damage, which is at the root of many diseases. Curcumin is an integral part of this plant and is a polyphenol (antioxidant plant compound) that improves inflammatory conditions, aids pain management, and eases arthritis. Incredibly, recent studies have even shown curcumin has a positive effect on Alzheimer’s disease and possibly depression. This is due to the way it increases BDNF, a crucial protein in maintaining nerve cell health. Curcumin is difficult for the body to absorb without an aid like black pepper, which contains an enhancer called piperine. By incorporating these spices, you can empower yourself with a natural approach to cooking that will improve your health.

Peppermint (M. balsamea Wild) might be one of the most beloved herbs in the world for its stimulating scent and flavour. Historically the ancient Egyptians and Greeks cultivated peppermint for digestion problems. The herb’s main active constituent is menthol, which creates a cooling sensation and has mild anaesthetic effects. It calms stomach inflammation and nausea, aids digestion and treats IBS symptoms. Peppermint is also a significant antioxidant and antiviral, which treats herpes simplex virus type 1 and herpes simplex virus type 2 topically. Recent experiments have found that its oil possesses antibacterial effects similar to synthetic antibiotics. But perhaps the most impressive of all is the extract of this flora’s leaves anticarcinogenic activity.

Known as Salvia officinalis, sage was used by Egyptians as a fertility drug and by the ancient Greeks to stop bleeding. This herb contains more than 160 polyphenols that protect our bodies against free radicals and strengthen our immunity. Sage’s flavonoids and polyphenols give it potent antioxidant, antibacterial and anti-inflammatory properties. Early research shows that it inhibits the loss of the acetylcholine messenger in the brain, which makes it protective against Alzheimer’s. In one study, this peppery herb also enhanced the cognition in memory, attention and word recall of study participants. But sage’s power doesn’t end with the brain, it also contributes to lowering “bad” LDL cholesterol and total blood cholesterol while raising “good” HDL cholesterol, which is fantastic news for our hearts. So powerful are its effects on our bodies that sage has been found to inhibit the activity of tumours and the spread of cancer through angiogenesis. Add sage tea to your daily routine for a mental boost and fortification for your natural defences.

With its calming effects  recognised around the world, chamomile is a great herb to incorporate into your diet for wellness with lasting results. These golden and white flowers are anti-inflammatory, analgesic, antispasmodic and sleep-promoting, and can soothe the nervous system, boost immunity and fight harmful bacteria. Chamomile is especially helpful for women with menstrual symptoms as it relaxes the uterus and alleviates depression and sleep problems. Scientists in Tunisia have confirmed that chamomile extract has potent antidiarrheal and antioxidant properties. The primary bioactive material of chamomile is the antioxidant, apigenin. Apigenin has been shown to fight some types of cancer cells, and studies prove that imbibing chamomile tea protects against thyroid cancer. This wonder plant improves cholesterol levels and reduces “bad” LDL cholesterol levels in diabetics, showing excellent promise as an aid for heart health.

Garlic (Allium sativum L.) has been used as a resource by humans for the past 7000 years and was prescribed medicinally by the Sumerians, ancient Egyptians and Greeks. Garlic is widely used around the world and considered a powerful curative agent. One of the reasons for this lies in its concentration of thiosulfinates, which have antibiotic properties and help flush the digestive system of toxins. Among these is allicin, which is responsible for its potent therapeutic potential. Garlic consumption reduces the risk of cardiovascular disease by lowering cholesterol and reducing blood pressure and has a positive antioxidant and antimicrobial effect on our bodies. The allyl sulfides in garlic also have anticancer properties; reducing both cancer cells and tumour growth. This ubiquitous bulb actually fights against bacteria, giardiasis and candida albicans.

UNLEASH YOUR HEALTH WITH WILD TRIBE

Our team at Wild Tribe is here to help your body build a foundation for long term health through a natural approach to diet, lifestyle change and detox. We take a balanced approach to nourishing and healing, allowing your system to cleanse gently through diet and exercise, so you can emerge vibrant and renewed. Our menu incorporates these powerful herbal remedies and superfoods into nutritious meals and fresh beverages designed by our nutritional alchemist Anastasia. Come visit us at Wild Tribe Cafe and Visit Natural Detox Resort to destress and detoxify on the tropical paradise of Koh Samui.

Want to join the discussion?
Feel free to contribute!

Is a Detox Retreat Right for Me?

Tips to Get Yourself Out of Bed
Scroll to top
Visit Natural Detox Resort
4.4 Stars - Based on 188 User Reviews